Just ordered one too! A bit of badly needed brightness and fun for my daily commute to the hospital where I work. Unfortunately will be on my Citreon just now...........

Plaque arrived yesterday and, lieu of driving About on Drive It Day, placed it on one my my stationary cars (although I did fire up the engine).

Really disappointed that mine didn't arrive in time to go on the car today - I took the Traveller to Morrisons for my weekly shop!

Email confirmation said mine was shipped on the 22nd , still not arrived !!! Just hoping its disruption with the mail due to the crisis !!!!!

The mail is very slow at the moment. They have a lot of people sick or isolating.

Arrived this morning , a pleasurable little job to do later on fixing it to the Minor !

Just received mine, just have to plan a non journey.
See you all at the other side

You might have seen the similar project - the 'Stay at Home Motor Show' this coming Sunday (May 3rd) where we're being encouraged to put the cars on the drive for anyone walking by to see. Dragonfly are doing a plaque for that too - another charity raiser with the hashtag #ClassicsforCarers - if any of you use those kind of things

I'm going to pop the Traveller on the drive and try to raise a bit of money for a local Derby charity called Safe and Sound who are caring for local children and young people, especially now during the pandemic - www.safeandsoundgroup.org.uk

I've even set up a JustGiving page which I'll shamelessly plug here... you never know!

As a charity professional also a brief note on the debate earlier in the thread! For many donors, the chance to get something back (ie a rally plate) for their donation is what makes them donate in the first place - without it, they are less likely to donate at all. Quite often it doesn't really matter what the charity is, so long as they like the product! Obviously there are some generous folks on the forum and you're right that a direct donation to a charity (rather than a 'proceeds from' product sale) will probably be worth more as a one off donation, but the impact of a large scale proceeds of donation is also important. (for example if 1,000 rally plates are sold and the proceeds are £4 - just sake of argument - that's £4,000, which is unlikely to come in from well meaning individual donations - both are important methods of donating to encourage!)

As for unscrupulous raisers that aren't donating much to charity after the fact, it always pays to do your research if you're at all unsure - and as mentioned, if you're still unsure a direct donation is always safest. But the vast majority (like this rally plate thing) are legitimate and donate a reasonable amount.

Yeah, received my plaque today but I dont think my Clarence is gonna be ready for quite a while.
However with this lovely weather and maintaining social distancing having the garage doors open has meant some great conversations with passers by.

Ours flew in today (but I'm driving the Kangoo 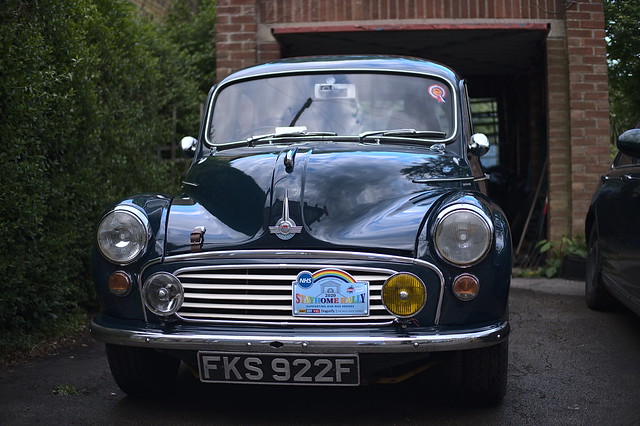 Have you thought of trying to sell your reg. no. to Mat Hancock?... Hmmm? Perhaps on second thoughts?

These have raised £15k, so a not inconsiderable sum. A good effort.

Brilliant , well done them — and us !
Post Reply
37 posts