If you need something, try asking for it here - you never know
Post Reply
16 posts • Page 1 of 1

Hello
I have recently purchased a 1967 traveller and would like wider wheels (sorry if I offend any purists). I realise that this might be a stupid request but would anyone out there have either a pair or a set of 4 van wheels with or without tyres for sale?
I know that I can buy new ones from a couple of places which I will probably have to do in the end, but I thought I'd try this route first.
The other option I was thinking of was getting my existing 3j wheels banded to 5.5j. Would anyone be able to recommend any specialists that could do this near me - I live on the Worcs/Glos border.
Thanks

Van wheels are getting scarce or expensive now.
Occasionally a set come up for sale on Ebay and the like and are either stupidly cheap (as the seller doesn't know what they have) or expensive.
If you really wanted a set then buy from the usual suppliers, some are graded "B" but if you intend to paint them then any imperfections can be dealt with.
The issue with banded wheels is they have to be done correctly to run true, a friend had banded wheels on his MX-5 and caused him hours of grief with the tyre pressure dropping due to a leaking weld, and one of the wheels had to be redone due to balance issues.

I'm not saying all banded wheels are bad but I personally wouldn't trust them, a set of van wheels will set your Traveller off nicely.
Proud owner of my first Morris Minor

Thanks for that Sir. I probably will go down the route of buying new wheels - as you say the 'B' grade ones will do fine.
Any suggestions as to the maximum safe tyre width on the 4.5j wheels? I want to keep the same circumference as the standard tyres.
Thanks
John

I think back in the day, when the Post Office and the like were using the vans from new, they were shod with 145 and 155-width tyres, however, 165/70R14 radials can be fitted which seem to suit the car quite well. Any wider, and you end up with heavy steering and an overly 'balloon' look to the sidewall, which doesn't aid the handling.
Maurice, E. Kent
(1970 Traveller)

Thanks for that Chipper. I have just ordered a couple of 4.5j wheels (without tyres) from ESM. As you say, I don't want the tyres to be balloon like in appearance. Would the 165/70R14 look OK in this respect? Because it would be a toss up between those and the 155/14s.
Would I be right in assuming that the 165/70 has the same circumference as the standard tyres?
Also I am going to initially go for the wider tyres at the rear only to see how the car drives. I then might at a later date replace the front ones as well.

The first thing to remember is that the majority of Minor vans were supplied new with the same 3 inch wide wheels as the cars. It was only after 1968 - some 15 years into van production(!) that the option became available to specify the more expensive 8cwt version of the van and pick-up and it was these which were fitted with the 4.5 inch wide wheels. Most of the larger fleet buyers such as the Post Office chose not to pay for this option hence their vans didn't have the wider wheels anyway. So. Don't ever assume that because you're buying wheels from a van that they will be wider than those from a car

Also, a basic van was supplied with crossply tyres, so none of the sizes mentioned above would have applied in any case. Radial ply tyres were an option on late model Minor 1000s and were always 145 x 14. I am not sure if radial ply tyres were an option on an 8cwt van but would expect the size to have been 155 x 14 if so. I agree that a 165 width would also be perfectly suitable.

As for the gearing, it depends on what you want to achieve. The gearing of the cars was originally chosen with crossply tyres in mind and these provide a larger rolling radius or diameter in simple terms. Changing to a radial tyre therefore dropped the gearing slightly in real terms but the difference would have been small. There are tables available on the internet which provide all the measurements but a 165/70x14 tyre is likely to give similar gearing to a 145x14 I would think and will be a good place to start. I wouldn't recommend going any wider and having experimented with various wheel and tyre combinations on my Minors over the years I have to say that my completely standard car fitted with standard wheels and 145x14 Bridgestone tyres drives the best of all. The wheels and tyres do look a bit lost in the wheelarches though and there is no doubt that larger wheels and tyres do suit the appearance of the Minor

Thanks for that ManyMinors. I didn't realise that the vans had different sized wheels. As you might have guessed, I was looking for the 4.5j not the 3j wheels. Anyway, interesting read. Cheers.

DemountableJohn wrote: ↑
Sat Apr 25, 2020 9:55 pm
Thanks for that Chipper. I have just ordered a couple of 4.5j wheels (without tyres) from ESM. As you say, I don't want the tyres to be balloon like in appearance. Would the 165/70R14 look OK in this respect? Because it would be a toss up between those and the 155/14s.
Would I be right in assuming that the 165/70 has the same circumference as the standard tyres?
Also I am going to initially go for the wider tyres at the rear only to see how the car drives. I then might at a later date replace the front ones as well.

This car, belonging to a member of the RetroRides forum, has a set of Vredestein Classic Sprint 165R14 (80-profile) tyres, which look pretty good to me: 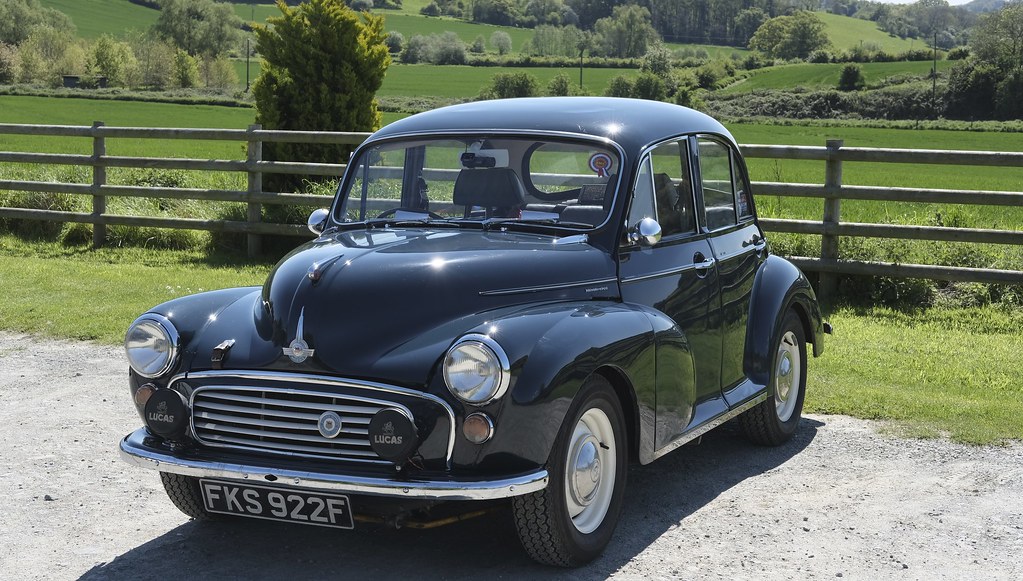 That's really helpful. Thanks. I should be getting my new wheels (without tyres) tomorrow.
Cheers.

Would you post a picture of the quality of the wheels from ESM?
I too will be ordering a set at some point but the website photographs don't really show that much.

Hello Murrayminor
Wheels arrived today. Happy with them. Photos of one of them attached. The other one is much the same in quality. If I were to be critical then the paint finish is a bit thin in places and there are a couple of paint chips - see photos. As I say I am happy with them and will at a later date probably order another two. Cheers.

They don't look bad at all do they.

Probably better than the close-ups show and no I don't work for ESM. I just need to decide what size tyres to buy. Do I get 165/70s or 165/80s and do I go cheap, mid-range or quality tyres?
Cheers
John

My van rims have 155s fitted. If you look upon tyres as safety items, stick to a known make, that eliminates cheap.

Hi,
I must say the wider wheels do look purposeful in those pictures of the traveller and the saloon.
As to the quality of paintwork on the ESM wheels, I notice the box lid states 'B grade', I know products can be graded, so maybe this is why they were classed as 'B grade', a bit like seconds.
Personally I don't think there is anything wrong with them and this will be hidden behind the hubcap anyway.
The only concern I can think of might be rust, so I would simply buy some zinc rich primer and Old English White paint and touch them up to protect them.
Best wishes,
Mike.
1954 Series 2 on axle stands needing more welding......

Good point Les. I usually go for mid range price wise to be honest. I did initially think I'd go with the 155s but wanted as wide a tyre as possible on the wheels (more cosmetic than any other reason I know).
Jagnut66. Yes I did opt for the 'B' grade as they were cheaper than the 'A' grade and look to be fine by me. I think I will go for some zinc rich primer though as you suggest.
Cheers
John
Post Reply
16 posts • Page 1 of 1