i want to put in my morris a pair of the cup connectors that connect the terminals.
I had these on my wolseley 1500 and i really liked them, but finding a pair now if proving to be elusive.

Anyone know where i can buy a new set OR if they have a spare set i could buy?

I have attached a picture of what i am after, if my description is a bit vague.

I haven't seen that style for many a decade, perhaps the 1970s.
I think your only option is to look around at auto jumbles or check ebay occasionally.
I wonder if there was a technical reason for them going out of use, such as furring up on the inside with no chance of it being noticed?

I'm sure batteries used to have a small hole pre-drilled down the centre of the terminal post to accommodate such connectors, but I don't think they do any longer. Certain none of our cars have a hole in the terminal post. Again, I think the last time I recall seeing such batteries was decades ago.
Basil the 1955 series II

i wouldnt of though about calling them battery helmets, but that will aid my search.
if worse comes to the worse and i find two knarly ones, i can use them as patterns and make my own up.
Cardinal the Wolseley 1500 , 4/44 wolseley, frogeye sprite, series 3 Land Rover, Primrose the Morris Minor, MGT (money pit) now Alice the confused Morris Minor.

Unfortunately people deficient in grey matter cut them off to fit the common SMMT clamps. Especially when converting earth polarity. You just have to scour autojumbles or solder them on to the cable. I had to do this on my Humber which has a very long earth cable. Be careful - the 'helmets' will melt if excess heat is applied - I wasted one this way trying to release the cable from it. They must be formed around the cable during manufacture. The next one I cut the cable by the shank and drilled the remains out, forming a hole ready for the new cable. 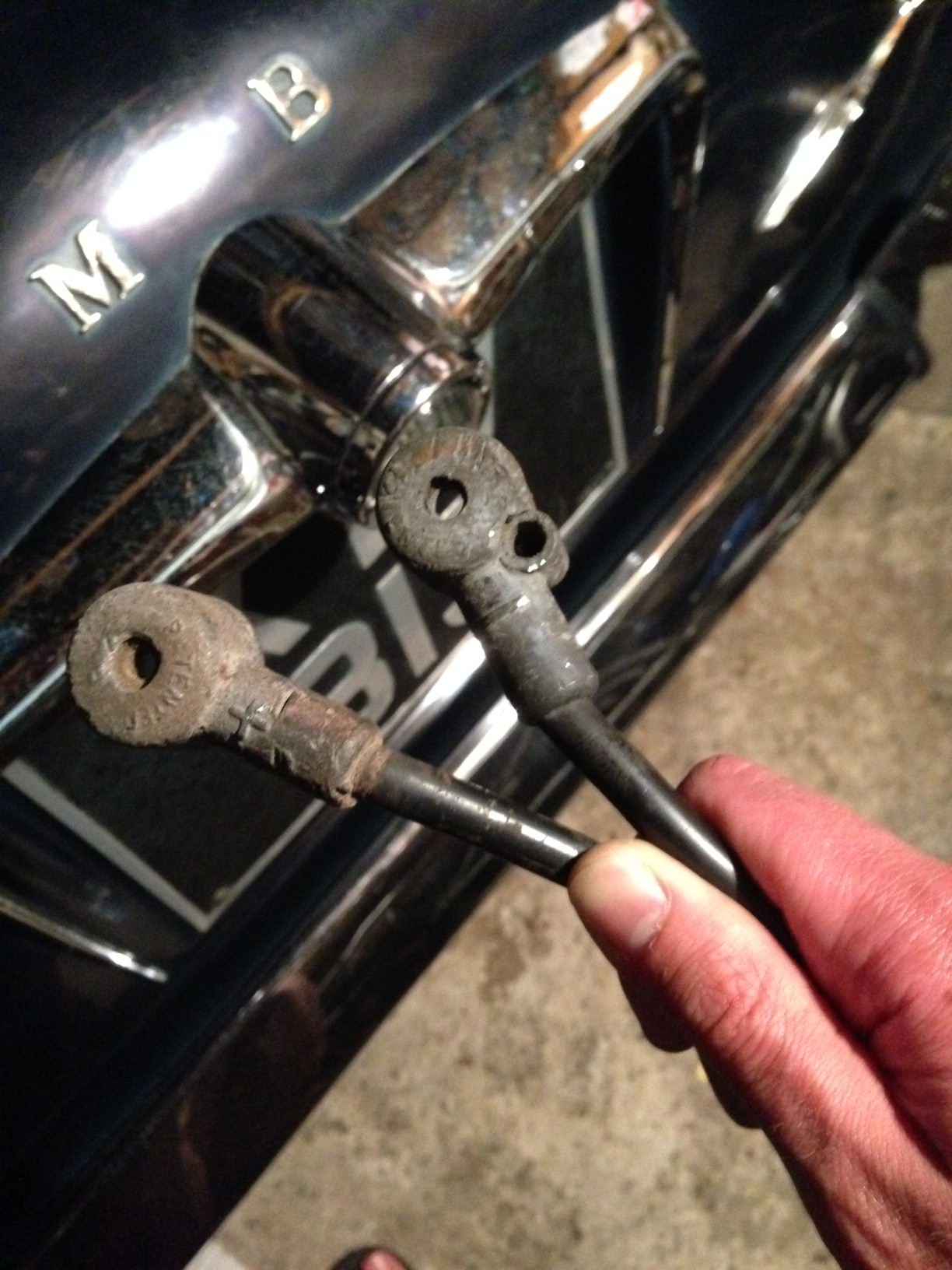 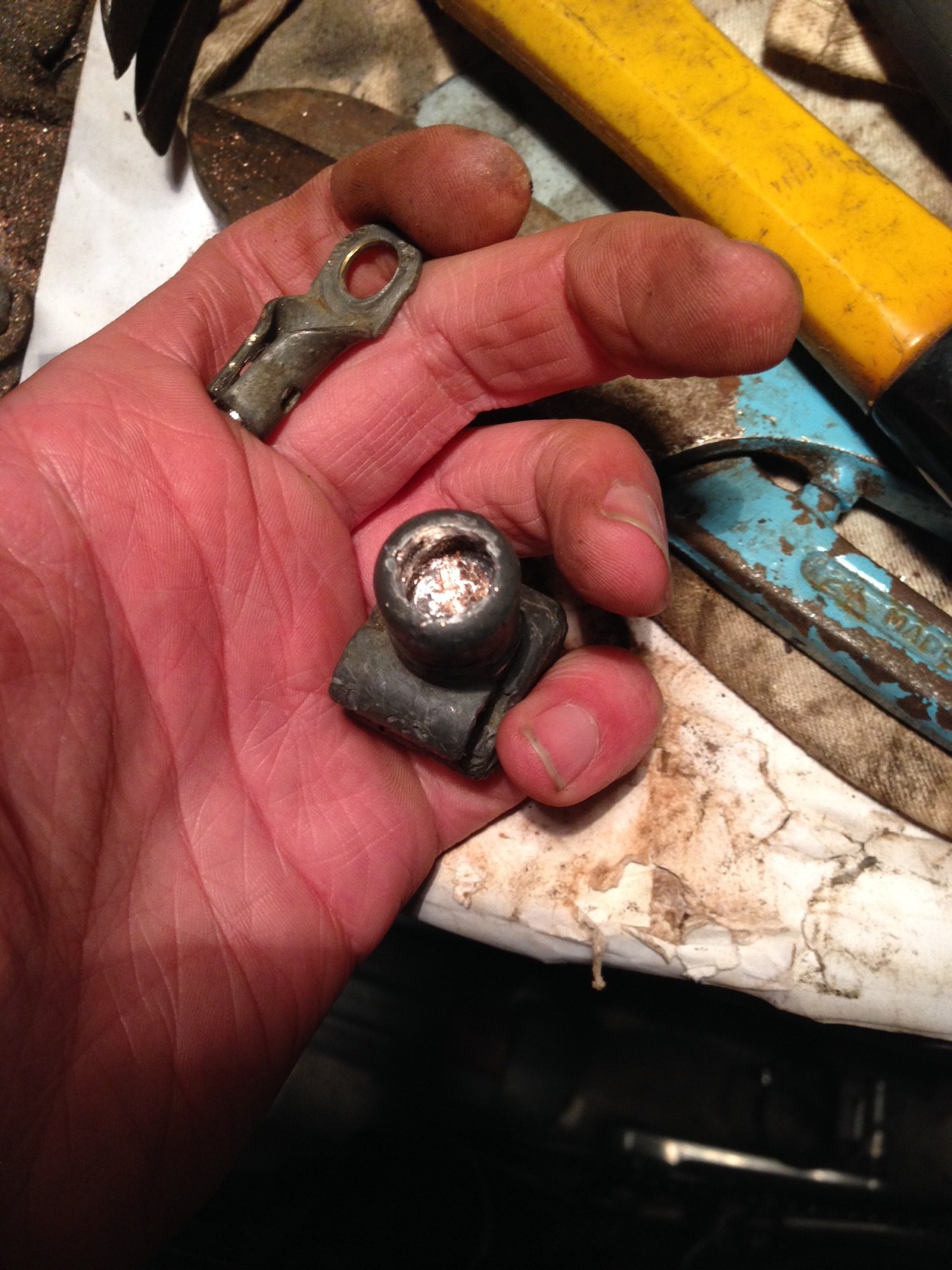 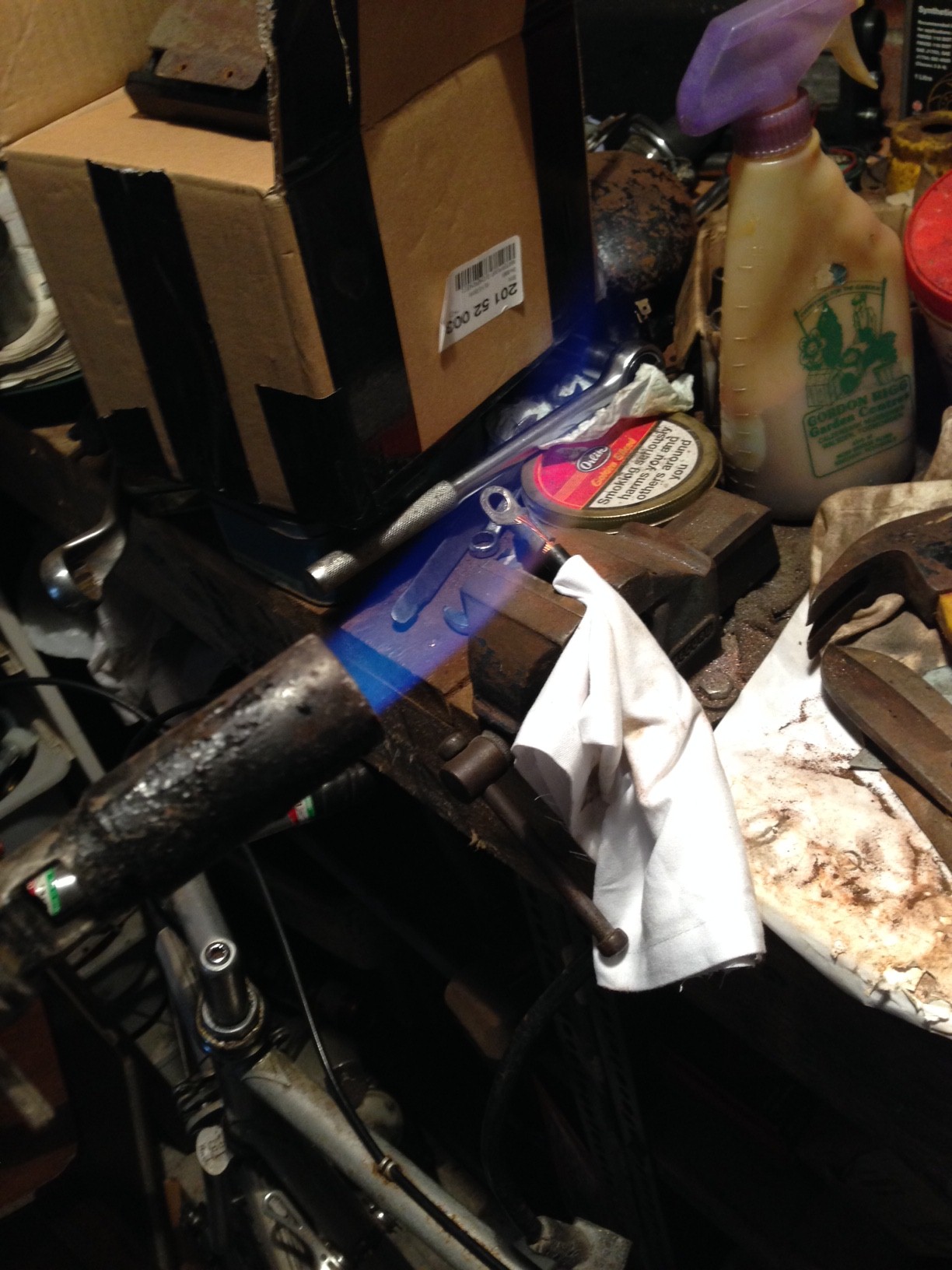 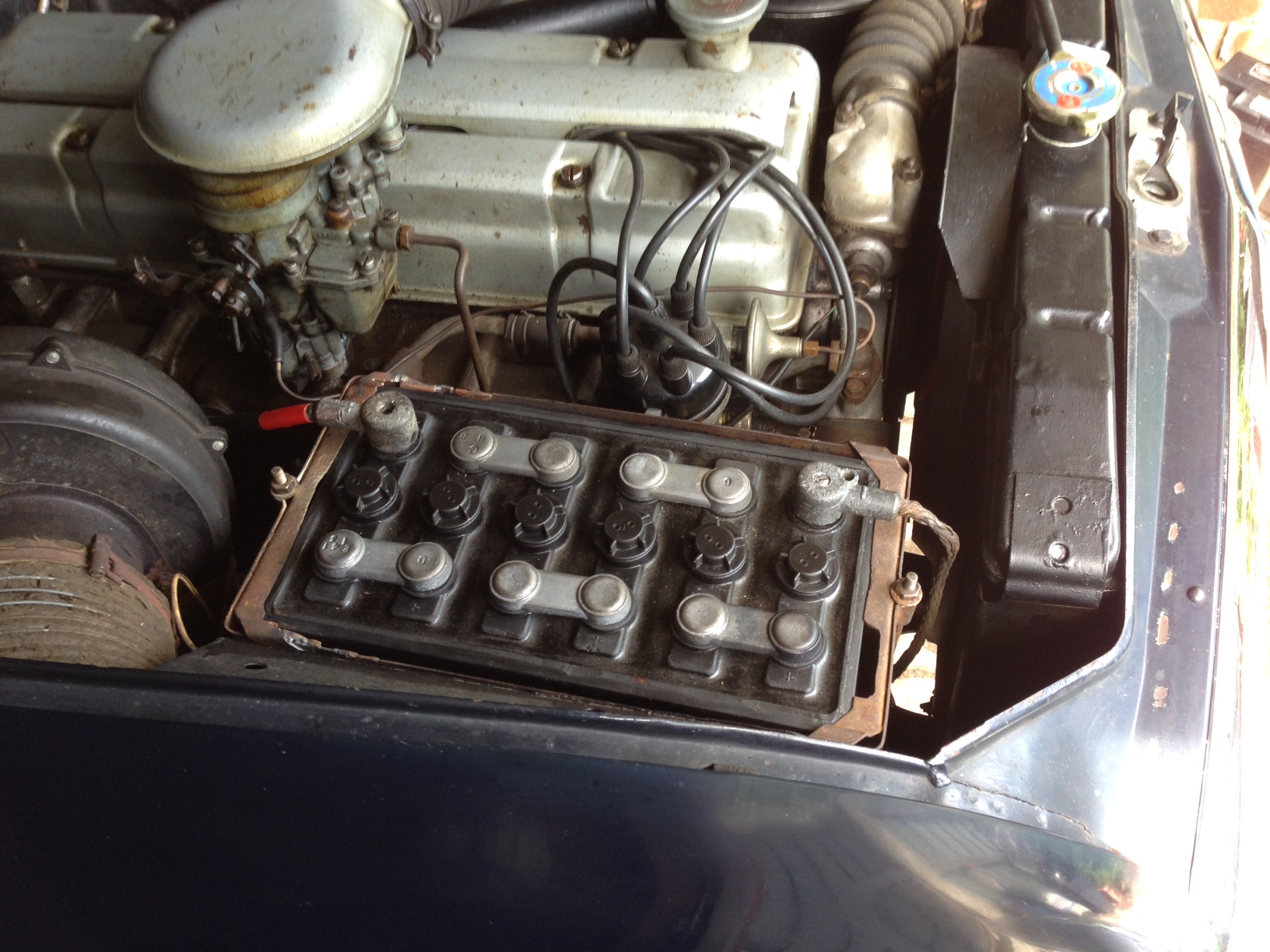 JOWETTJAVELIN wrote: ↑
Sat Oct 12, 2019 8:04 pm
Be careful - the 'helmets' will melt if excess heat is applied - I wasted one this way trying to release the cable from it. They must be formed around the cable during manufacture.

But there is some mention of Bronze replicas being available which solves the problem of them melting at almost the same temperature as your solder.

Seems these people have made up cables, but looks like you need a mortgage to get them.
https://www.sngbarratt.com

well ive found one, which i can duplicate easily.

I dont think they stopped producing them because they where made of lead, i think the world of car design simply moved on.
As for the lead, anyone who lives in a house built before the 1920 will get there water from the mains via a lead pipe, may have lead internal pipes for older houses etc and if it was that big of an issue then there woud of been a whole sale removal of it, which there hasnt been.

As long as your not stupid with it, lead is perfectly safe.

As for them in bronze, i have seen that too and the price did make me feel a little giddy, but its an intresting alterntive.
If people are still looking for them for their cars, then i might see if i can make a double at a time and sell to on ebay.
Cardinal the Wolseley 1500 , 4/44 wolseley, frogeye sprite, series 3 Land Rover, Primrose the Morris Minor, MGT (money pit) now Alice the confused Morris Minor.

The UK Public water supply has it's Ph adjusted to reduce the plumbosolvency (how readily it will allow the lead to leach into the water). It's not just fluoride they add to the drinking supply......

Lead plumbing was banned in 1970, around the same time lead paint was, and probably when these connectors stopped being made.


In hard water areas the scale that forms on the inside of pipes protects against the dissolution of lead from the pipe into the water. However in soft upland water supply areas there is a greater likelihood of lead from pipes being present in the water. Where this risk exists, water companies treat the water with orthophosphate and this reduces the problem significantly.

I don't think Chris is planning on licking his battery terminals, I'm sure he'll be fine.

Considering the amount of crud in and around a moggy, handling a bit of lead is the least of my worries.
Cardinal the Wolseley 1500 , 4/44 wolseley, frogeye sprite, series 3 Land Rover, Primrose the Morris Minor, MGT (money pit) now Alice the confused Morris Minor.

I didn’t think I was deficient in grey matter, but perhaps I am, because I prefer the type that clamp around the posts.
However a preference of the helmet type is purely personal and I don’t have any criticism.

Me too, for a few reasons. I also prefer to have insulated covers on them, but I’m certainly in no position to criticise what people want to do to their own vehicles

Most probably, but stopping production was very likely to do with the safety of the workers making the darn things, day-in, day-out....... breathing in the fumes.....adsorbing it through their sweaty hands, etc.
Lead is still used for flashing around roofs etc, but it's dangerous enough to have it's own regulations, same as asbestos does.
The Control of Lead at Work Regulations 2002 (CLAW) place a duty on employers to prevent, or where this is not reasonably practicable, to control employee exposure to lead.
Before 2002 it was CLAW 1998, before that it was covered under the Factories Act 1961, which had only included protection for pregnant females and young persons.
Basil the 1955 series II

I think they were prone to getting loose on the posts as some people tapped them on before doing up screw which caused them to become loose. Many a time had to take off "helmet" (no rude comments please)

I seem to remember these battery terminals getting a very poor reputation when they were 'standard' production.

Unless you want to have 'originality', I would suggest fitting a good clamp type connection, after making sure that the battery posts and clamp connections are clean and smeared with some Vaseline.
Last edited by IslipMinor on Sat Oct 26, 2019 6:28 pm, edited 1 time in total.
Richard

I had forgotten the happy times spent either trying to remove the terminals to fit a new battery, or getting just a click when pulling the starter and having to lift the bonnet to tap the battery posts to start the car. This involved emptying the boot when I had a mini.

Another disadvantage was that they depended on a small screw being threaded into soft lead which often didn’t hold and needed a succession of larger replacement screws.

The above 4 comments are all very true.

As I said on 12 October, they weren't very good at doing their job.
Basil the 1955 series II

Hi,
Of more concern, health wise, I would have thought, is the asbestos heat shield underneath our cars, between the exhaust and the front passenger floor.
Admittedly it mostly gets damp and covered with oil, which would suppress any dust in normal circumstances, however what about if you need to remove it / repair that panel?
Is there an alternative available and how would you go about safely removing and disposing of it?

I would also mention asbestos in drum shoes at this point, I'm sure the modern replacements don't have any in their make up but there are still some NOS items out there available to fit, I know because I have to admit to buying and fitting a set in the not too distant past.
However with brake drums I would imagine it is more common to find people wearing a mask, especially if there is the risk of any dust being present, regardless of when the shoes were fitted and whether they were from new or old stock.

I’ve removed a heat shield for floor repairs. It is held on by four small bolts and I ground their heads off from inside the car without disturbing the asbestos. After the repairs I made a new metal cover and reused the asbestos piece.

As I understand it the danger of asbestos is in the release of dust or fibres and an intact piece of asbestos can be handled without undue risk. Brake linings pose a risk because they are abraded in use and produce dust but the shield remains intact except perhaps in an impact.

For disposal I believe it goes in deep landfills.
Post Reply
32 posts