the Pasinis' MM spent several months (since October,, in fact) in her heated garage, dutifully covered, the battery connected to a trickle charger. Now I am ready to use here again, as the weather now is exceedingly good, sunny and warm. I have tried to start her some days ago, but I had a strange accident. I connected the battery, checked everything, turned the key and the (new) SU fuel pump begin to whirr quickly, as always. But instead of slowing down gradually after a few seconds and getting silent (having filled the carburettor bowl), it continued to tick very fast without any sign of slowing down even after 30 seconds or so. I switched it off, checked if I has enough gas (tank half full on the gauge, as I remembered it to be in October) but I put 2 more litres of fresh unleaded in, just in case. Nothing changed; I tapped the pump gently with a screwdriver handle: nothing, it still continued to click very fast. So I decided to try starting the engine, and it fired up immediately, settling in its quiet, very regular idle. I let her idling for a few minutes, then I switched it off as I couldn't test-drive the MM yet.

Does anyone have any idea on what could be the cause of this fast clicking of the SU pump? The tank had been fully cleaned last year and the MM never had any hiccup after the end of her recommissioning in Summer 2011.

As we are at it, I'd also like to ask you what can I do to have the choke cable lock in its desired position: I bought this cable new one year ago but it doesn't stay in the 'cold start' position, it immediately snaps back in normal position so I have to keep it pulled out manually until the engine idles regularly....

all the best from Italy, 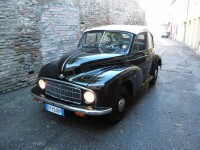 With my Lowlight it's either one clothes peg or 2!!!!

Laurie Blewer
MMOC member since 1986
Dorset Branch Secretary for ever!!!!

The subject of clothes pegs has been discussed in detail. For concours only period wooden pegs are permitted which when not in use should be clipped to the interior mirror stem.
Seriously if you have the correct choke knob it should have a ratchet mechanism to hold it out.
Fuel pump. It could be drawing in air, check for leaks in the supply pipe and the pipe connection to the pump. Check also pump diaphram and mechanism. It could be pumping enough to supply the carb but continues to tick
[sig]3580[/sig]

in a previous message I mentioned that my MM had a strange problem, i.e. the fuel pump tickling furiously and never ceasing as it would be supposed to do. Following Mike's suggestion, I checked the fuel lines for leaks, but to no avail; no leaks, no fuel dripping down, nothing visible. Until I noticed that the new glass fuel filter, that I had fitted a few months ago, was quite 'cloudy'.... I loosened the two pipes connecting it to the fuel lines and this is what I found

The glass was broken and the filter disintegrated once I grabbed it. This explained everything as the leaks, not visible from above, made it impossible for the pump to suck fuel for the carburetor. It had started last time using the fuel in the bowl, but today it wouldn't. I reconnected the fuel lines and the engine started first try, settling in a pleasant regular idle.

I must therefore thank Mike for giving me to right clue about the leaks, but at the same time I must say that I shall NEVER fit a glass-bodied filter in my cars anymore!!

Have a nice time

The filter in the fuel pump and the trap in the bottom of the float chamber are quite adequate, no inline filters are required
[sig]3580[/sig]

Did you get an air-cleaner correct for your early Tourer: I realise it was months ago?! I have that and also many part-used but serviceable Michelin radials (155x14), but Australia may be too far away unless you know someone who is flying back home from here to you!
regards Phil, Melbourne.
Post Reply
46 posts

Users browsing this forum: No registered users and 2 guests