I fitted an alternator on both of my Moggies and it is straight forward to do and certainly one of the must mods Imo.

Reliability wise it is much better than the control box I have found.
Morris Minors..... such fun

The fitting of an alternator mod kit is so easy and as regards the wiring alterations it is described in detail on this web site.

Whilst anything can be unreliable I have never had any problems with alternators on the various cars I have owned.
Checking the condition of the brushes at a high mileage is an imperative.
It has to be remembered that an alternator turns at nearly twice the speed of a dynamo so will have turned many more revs for the same mileage as a dynamo.

Fitting the alternator gets rid of any control box issues.

I didn’t say he was off hand. I just shelled out money for a new dynamo. Unfortunately, all of the advice to simply buy an alternator came on the forum AFTER I’d ordered the dynamo.
Did you never have a few days where nothing was going right?
I’m just trying to get it fixed.
That’s all.

We had to have an ambulance this afternoon after my wife was struck down by a severe case of food poisoning from a dodgy pub lasagne at lunchtime. So I have been a bit pre-occupied myself.

Sorry to hear that Phil

So, as the control box points are now in the closed position on the right hand coil, it seems that the battery is trying to power the dynamo as a motor, hence the burning smell and smoke because the new fan belt is stopping the dynamo from turning.
I've probably fried the brand new dynamo now.
So, rather than buy a(nother) new dynamo and a control box, as has been pointed out, an alternator kit from Bull Motif is £74 with a full kit and instructions.
I'm just checking here, I don't need to have electronic ignition do I? I can't see why I need that if I fit an alternator.
(Please don't start the electronic ignition vs points debate! I know, I know! If I needed to convert it, I would, but I just want to get it running, without red lights, smoke or burning smells!)
I know I have to convert it to negative earth for an alternator.

No, the alternator has nothing to do with electronic ignition at all.

There is also a useful PDF on how to fit an alternator.
https://www.moss-europe.co.uk/media/pdf ... ctions.pdf

If you coil is currently mounted above the dynamo you will need to re site it somewhere else, I mounted mine on the inner wing.

After fitting an alternator I found that that space was tight on the inner wing and the king lead was a little short when I mounted the coil on the inner wing so I modified the old bracket that was on the dynamo to bring the coil out a bit. I fitted some spreader washers on the bolts after this picture was taken. 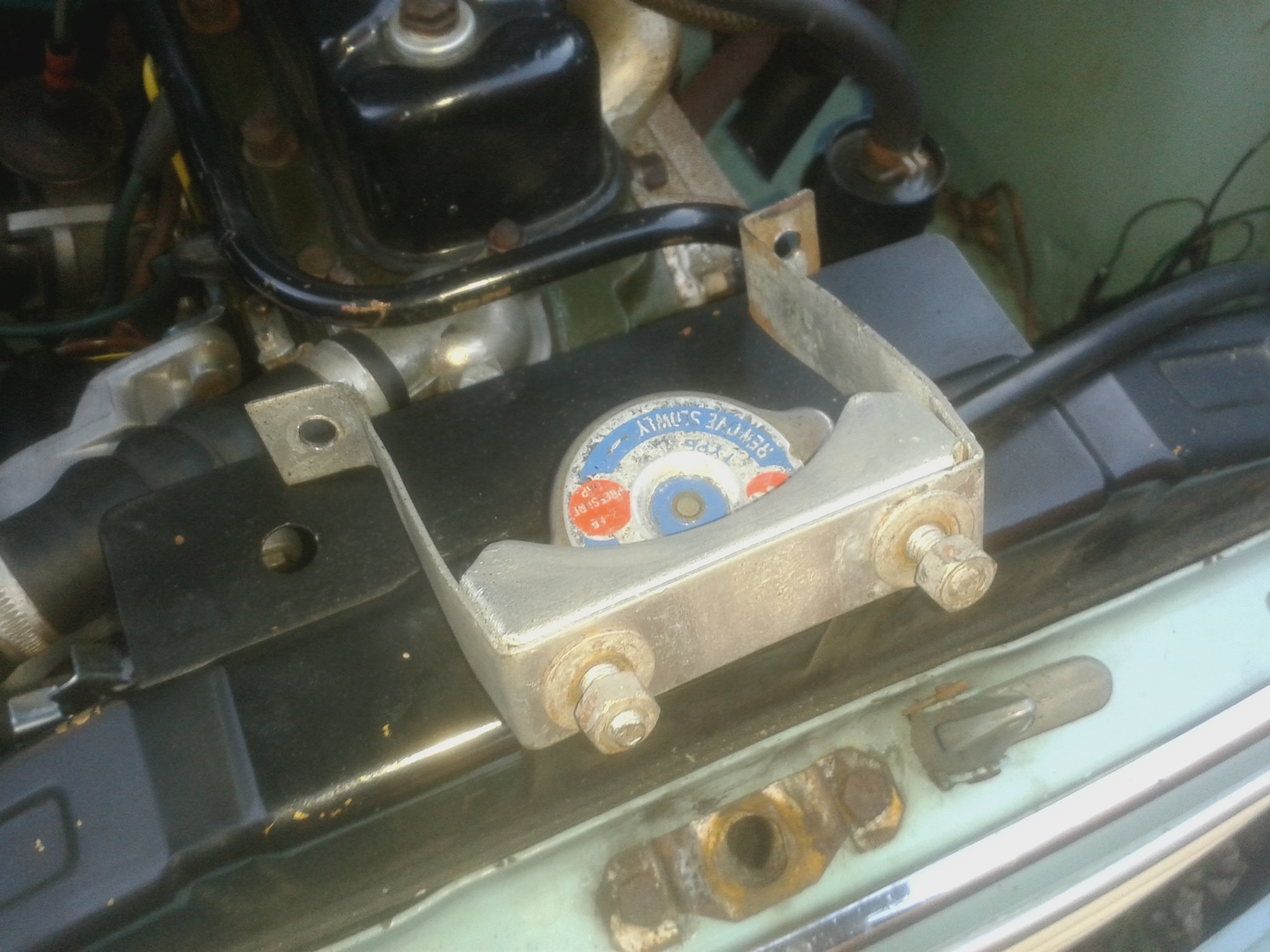 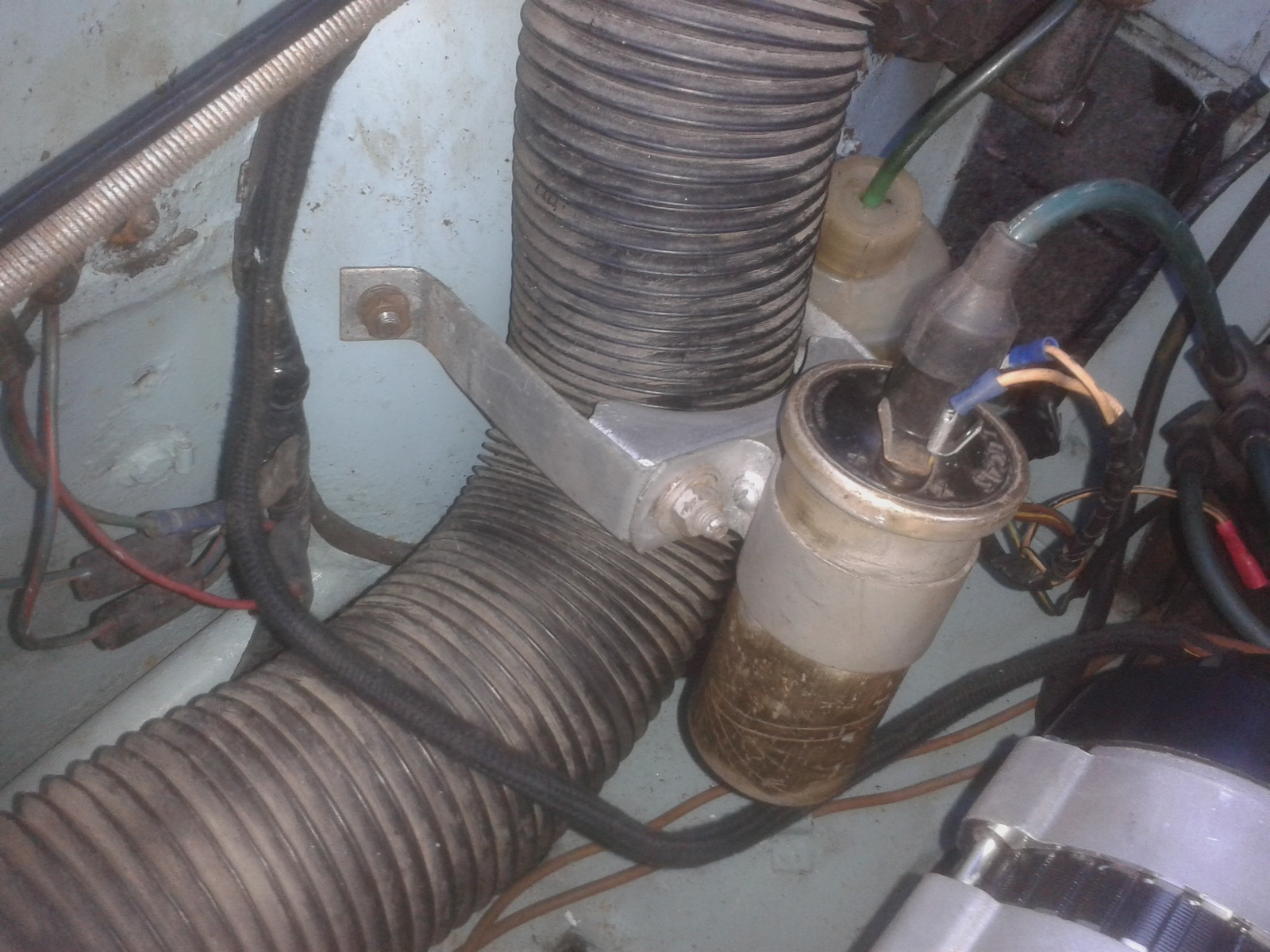 The ESM kit comes with a coil mount that puts the coil in almost its original position.

I understand that is not a good idea to mount the coil on the alternator, electrical wavey stuff goes weird

panky wrote: ↑
Sun Apr 21, 2019 9:58 am
I understand that is not a good idea to mount the coil on the alternator, electrical wavey stuff goes weird

Ahh, that’ll be why Ware’s put mine on the inner wing then. Thanks for the heads up.

I fitted a vertical coil bracket to the inner wing, it takes up less space and is easier to route the short HT lead to the distributor and also allows more air flow around the coil to keep it cooler. If the coil sits next to the engine near the alternator or dynamo it gets heat from being near those items, but it is also in the direct path of hot air coming in through the radiator as well. A position low down on the inner wing seems to be the coolest place under the bonnet.

Right, I'm officially confused.
Gone back out to the car today, the contacts Points have opened on the right coil in the contact box. I disconnected the fan belt, connected the battery and Dynamo and pushed points closed, the Dynamo spins.
Feeling confident so I connected everything back up, started the engine.
The red light went out immediately, points re-close, engine purrs, voltage on battery steadily climbing, reached 16v in a couple of minutes. Points still closed. Switched engine off, points open.
Tried this a couple of times, works every time.
No smoke. I did notice that the points contacts on the left coil spark a bit and remain closed when engine running and remain closed when engine is switched off.
No confidence in the car not bursting into flames either so I disconnected the battery and Dynamo again but I can't keep doing this every time I use it.
My thinking is now,,,
The Dynamo is ok, it's charging. The old one wasn't. The red light is now extinguished as it should after starting.
The problem seems to be in the control box. Points stayed closed yesterday and tried to spin the dynamo, hence the smoke.
If I replace the control box, I'll have fixed the problem.
Yes, I know an alternator is better, but I've already bought a new dynamo and it's working.
£20 for control box or £75 for alternator kit and extra work.?
At what voltage should the points on the right side of the control box open, thus disconnecting from the battery?

16 Volts sounds a bit too high to me but maybe with a dynamo that is normal, mine runs all day at 14 to 14½ volts on the alternator, the dynamo cutout should operate at around 13 volts.
As you say it does point to the control box being the culprit. There is every chance that is what caused the demise of you original dynamo if it was working too hard and overheating.

If you can get a control box for £20 that does seem the most cost effective short term solution in your case.

Download the free manual and section N9 describes the correct settings for the regulator and how to adjust it. Normal charging voltage on my car (measured at the battery) 14.5v
Richard

At tickover, it's charging about 13v.
It's the fact that it stuck and almost burned out the dynamo and set the car on fire that worries me, so for about £22 and postage is a small price to pay for reassurance!

You could try cleaning the cut-out contacts with fine glass paper, then wipe off with thinners. The old ones are better made than the new ones. But after a shock like you had, I guess a new control box will give you more peace of mind. Fingers crossed this time!
Oh, and the left hand (voltage regulator) contacts are meant to be closed when the engine isn't running. But if you were getting up to 16v it wasn't regulating correctly, that's too high.

My original 60 odd year old regulator packed up with burnt out coil and wouldn't charge.
Didn't like to abandon the original but it didn't work and replaced it with one from ESM, not made anywhere near as well, but it works and was charging at 13.6ish volts today.

Thanks, I'll have a look at ESM, CW, and Bull Motif, compare prices.

A 12 volt lead acid battery should be charged at up to 14.5Volts. The typical control point is 14.4V.

16 Volts will ‘boil’ the electrolyte. This is bad, but not too bad, for an open vented (flooded) battery - the electrolyte will be split into hydrogen and oxygen and while clearly a fire, or explosion, hazard in confined spaces with any sources of ignition!

Flooded cell batteries are often (regularly, for deep discharge batteries) ‘equalised’ by charging at about 15 - 15.5 volts in order to ensure all cells in the battery are fully charged.

However in a sealed battery (valve regulated), over-voltage (beyond 14.4) will gas off the electrolyte and render the battery useless in short order - as the electrolyte cannot be replaced by topping up with distilled water as in the case of the flooded cells. If not maintained at full charge, the plates will ‘sulphate’ and also reduce the battery life, so it is imperative, with modern automotive batteries, to control the charging at close to 14.4Volts.

Alternators achieve this far more effectively than the dynamo systems. One cannot easily purchase automotive batteries in any other form than valve regulated sealed cell format - safety reasons and controlled, maintenance-free operation - these days. Expect poor battery life with dynamo systems with modern battery construction. If you get a long-lived battery with a sealed battery and dynamo, consider yourself lucky.
Post Reply
102 posts